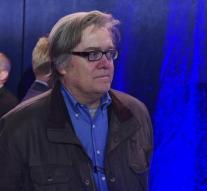 - Donald Trump is not even sworn in as president of the United States, but he gets all strong criticism. The appointment of the controversial Steve Bannon as its main strategic collaborator and advisor is bad. Bannon is seen as one of the leaders of the 'alternative-right conservative movement.

The chairman of Republicans in the House of Representatives, Kevin McCarthy, was asked about the controversial choice of Trump. He just wanted to say that people that do not have their judgmental. ' The president has the right to assemble his own team, '' said McCarthy. He added that Trump called 'must be given the chance to govern. '

Democratic side of the criticism was a lot brighter. ' Steve Bannon to the White House pick is an alarming signal that the elected President Trump remains committed to sowing hatred and divisions that characterized his campaign, '' said Nancy Pelosi, the leader of the Democrats in the House.

Bannon worked for the news website Breitbart. Reportedly, he admitted that the website turned into a platform for anti-Semitic and nationalist ideas.