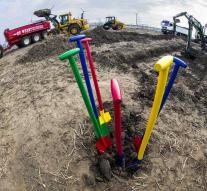 amsterdam - The Public Prosecutor in the Netherlands continues former real estate tycoon Rudy Stroink for bribing a director of Google. Writes the FD. He would have paid 1.7 million bribe his company TCN to get a prestigious Google data center to Eemshaven.

Stroink to appear Monday in court in Almelo. Also has been called up his wife. They are suspected of bribery, money laundering, forgery and membership of a criminal organization.

The Dutch corruption investigation Google director Simon Tusha is also regarded as a member of this criminal organization. Tusha at the time was responsible for the worldwide choice of location of data centers from Google.

The real estate guru denies involvement in the case. Yet Stroink in the period from the bribes the undisputed leader and owner of TCN. Additionally Tusha earlier this year tax known. He had to appear before a US court because avoidance of income tax on bribes which he would have received TCN.