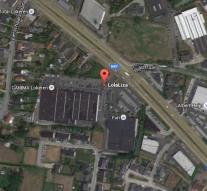 lokeren - A shoplifter is Monday in a clothing store in the Belgian town of Lokeren in a very original way to escape the grasp of justice. He undressed for the staff who held him and thus the staff dumbfounded left behind. The thieving stripper left the boutique without booty.

Store personnel Lola amp; Liza got a visit from a man around 16. 00 pm. In itself not surprising, but the clothes shop only sells products for women. Employees Arife Yaldiz Kaya and her two colleagues from Lola amp; Liza had right away that something was wrong, reports the Gazet van Antwerpen.

They caught the man as he money from the till was trying to steal. 'He was shocked when he saw that we had noticed the theft and had already covered the money. When we tried to get him fixed then all together, he lowered his pants. We were shocked, 'says Yaldiz Kaya.


The thief left without shame to see his private parts and gave the customers present a picture of his bare buttocks. While everyone was stunned, the man took the opportunity to flee.

'A colleague and some customers are gone after him,' the saleswoman testifies. 'Personally, I stayed with my other colleagues in the store. She was huge in shock. '

According to witnesses, the stripping thief then got into a gray Opel and drove off in the direction of Zele. The car would have a Polish license. Police Lokeren currently conducting a criminal investigation.


'In retrospect, I still find it funny, but at the time it was still pretty scared,' realizes Yaldiz Kaya. 'We saw that the man was not armed, so that allowed us some comfort. But who expects now a thief suddenly pulls his pants down? 'The six customers were in the store, were impressed by the shocking striptease.