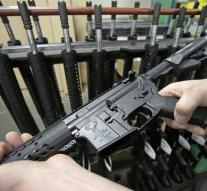 mchenry - The owners of an American gun shop have canceled a raffle for a semi-automatic weapon in favor of the victims of the massacre in Orlando. In the Chicago Tribune they say that legal obstacles are the reason.

The arms dealers in McHenry, a suburb of Chicago, were planning to give away an AR-15, similar to the weapon that was used in Orlando. According to shop owners only nonprofit organizations may according to the law in the state of Illinois, however, hold a raffle.

The plans of the shop owners, who claim to want to make a political statement and no one wanting to hurt were received with cheers. They said he had received death threats, among others.