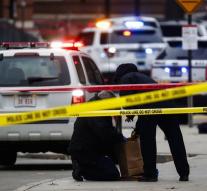 - The 20-year-old Somali Monday eleven people injured when he crashed into pedestrians and stuck around with a butcher knife in the US Columbus, may be 'self-radicalized.' So say sources close to the police investigation. Meanwhile terrorist organization Islamic State called the culprit 'a soldier of the caliphate.'

Abdul Razak Ali Artan would have come to his act by the call from IS to attack civilians in countries of the coalition member which IS combats. A police officer shot the man shortly after his attack on the campus of Ohio State University death.

On a Facebook page which was supposedly Artan stood fiery lyrics. He wrote that he 'was sick to see how Muslims are slain' and that he had reached the 'boiling point'.

Artan was born in Somalia and was legal since 2014 in the US, reported a source in the federal government. He studied at the university where he struck. Before he came to America, the man would have lived several years in Pakistan.