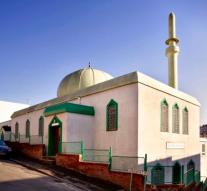 bristol - The 35-year-old Kevin Crehan, who was serving a sentence for leaving a sandwich with pork on a mosque, has been found dead in his cell.

Crehan was on half of his prison sentence in twelve months. He was in July, along with three others, was sentenced because he had bacon sandwiches leave at the entrance of the Jamia mosque in Bristol. He had tied a flag with the words 'no mosques' at the gate of the building. The court was seen as an 'attack on England.

A spokesman for the prison informs that examines the death of 35-year-old Briton.