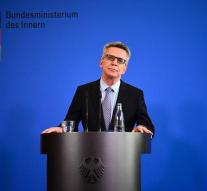 - The man who attacked passengers in a train in southern Germany acted alone and was impressed by the propaganda of terrorist organization Islamic State,, stimulated '. The video with the perpetrator who IS spread Tuesday, gives no indication that the 17-year-old boy had agreements with IS.

That the German Interior Minister Thomas de Maiziere explained Wednesday. Meanwhile, doubts about the nationality of the perpetrator. Until now it was assumed that it was an immigrant from Afghanistan. However, from the ranks of the German security services are reports that it was possible a Pakistani.

The attack four people were injured in the train, all of a family from Hong Kong. Two of them find themselves in mortal danger. The perpetrator was shot dead by police.


De Maizière warned Wednesday that Germany may have to face more attacks by so-called lone wolves who operate alone.