Home / World / Stricter expansions of Germany in the making 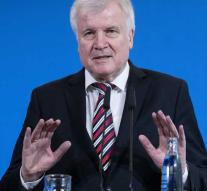 berlin - The German minister of Internal Affairs Horst Seehofer wants stricter action against asylum seekers who have exhausted all legal remedies and who have committed a crime and leave...

'Only when it is determined that people who have to leave the country actually leave our country, Germany has the means to support the people who need it', according to the minister.

Under the new rules, asylum seekers who violate the Opium Act or commit social fraud can be expelled from the country. This makes it easier to detain people who have to leave the country, for example if they do not release their identity.