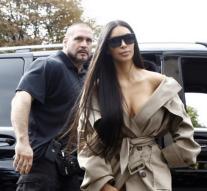 - Kim Kardashian has had the fright of her life during the brutal attack in her apartment in Paris. The question now arises: she gets back the millions of stolen jewelery or valuables were not insured?

That seems unthinkable, as the reality star has even incorporated some of her body parts in a policy.

How do insurance companies against stars that show off their valuables without any restraint on television and run for sale in daily life with what they have.

The Association of Insurers in the Netherlands says that owners of an above-average amount of gems in our country make individual agreements with their insurer. 'If it holds in the thousands of euros, insurers will look at it separately,' says a spokesman.

The agreements differ. The insurer, for example, stipulate that a jewelery owner has a safe in the house and have a good alarm system.

The price of the premium may rise as often jewels are stolen, or if its value skyrockets.\n  \n  \n   advertisement

The jewelry owner behavior with its precious which can affect policy conditions and the corresponding premium. Who regularly unattended and parade in full dress on the street, runs the risk of having to pay more than someone who keeps things safely under lock and key.