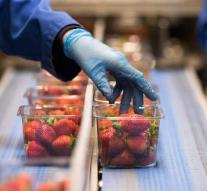 canberra - In Australia, alarms were made after the discovery of needles in trays of strawberries. A branch organization of growers says, 'have reason to believe \u0026 # x27; \u0026 # x27; that a resentful ex-employee is responsible for this, reports Australian media.

A Facebook user had a few days ago about the needles. He stated that a friend had 'consumed half a sewing needle' and had to go to hospital with severe pain. Further research would have shown that a needle was also in a different strawberry.

The authorities advise consumers now two brands strawberries throw away. They come from a farm in the state of Queensland. The highest health officer of that state says that three incidents have been reported to the police. ' A person has eaten a 'contaminated' strawberry '' said Dr. Jeannette Young.

The branch organization of strawberry growers in Queensland points to an ex-employee with an accused finger, but says he is waiting for additional information from the police. He has confirmed that presumed intent is in play.