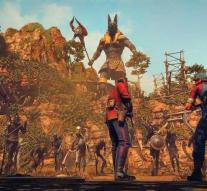 - Some developers focus their games on a bombastic story and fantastic graphics. While others are stuck in the core: the gameplay. Rebellion is such a studio and with her latest third-person shooter she clearly shows this.

Strange Brigade is an awesome co-op shooter with an Egyptian sauce and quality that only Rebellion can give us. The game you know very well to entertain when you go out with a group of friends, but on your own there is a lot less fun to experience.

Strange Brigade takes us to the Egypt of the 1930s. The evil witch queen Seteki has risen from the dead and she is pretty pissed. Logical also if you were grazed four hundred years ago by the local population and locked up in a nameless tomb. But then to get up with the idea that you are going to destroy the whole world may go a bit far. Fortunately, there is the Strange Brigade. A team of four explorers who are on their way with a Zeppelin to stop Seteki.

It is a story that does not have much depth, but the way in which it is told only serves one purpose: to tie the different levels together. The game does this in a very entertaining way with vintage 1930's films in which everything is told by a funny storyteller before the start of a level. Players then crawl into the skin of one of the four available adventurers and come each time a bit closer to the furious witch during nine chapters. On the way they come to all kinds of different locations.