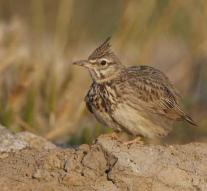 amsterdam - A strange bird prevents the opening of the second nudist beach in Belgium.

According to the Agency for Nature and Forest, the rare crested lark breeds just behind the dunes of Westende. It would be the only place in Flanders where the lark occurs.

According to the civil servants, the birds suffer from the 'edge activities' of the nude suns who according to them will certainly take place in the dunes. The naturist federation feels as if they are being put away as sex tourists. In Het Nieuwsblad a spokesperson says: 'We, too, regret this behavior, which has nothing to do with naturism. '

There is already a nudist beach in Bredene, but that is overcrowded. The Federation Belgian Naturism (FBN) therefore wanted a second strip of sand in the Westende, which is 20 kilometers further. Advantage: there is no building there on the beach.

The Flemish Minister for the Environment, Joke Schauvliege (CD \u0026 amp; V), feels little for it. In addition to the 'fringe activities', she fears that the plants will also damage the dune.

The naturists do not let themselves be scared away immediately. They now advocate barbed wire between the beach and the dunes of Westende.