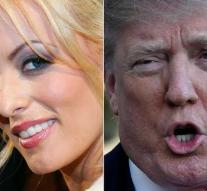 The man, while Daniels was on his way to the fitness club, would have looked at the little daughter and said that 'it would be a shame if something happened to her mother.'

Daniel's lawyer Michael Avenatti, who once helped Democrats with opposition research during their campaign, hinted at the interview that Daniels would come up with evidence for her relationship with Trump. But that was not the case during the exclusive conversation with journalist Anderson Cooper that had already been recorded.

Avenatti states that Trump and his personal lawyer Michael Cohen behave like gangsters with their intimidations.

Text continues under the photo