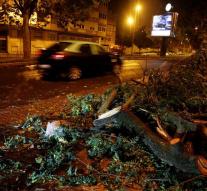 lisbon - The tropical storm Leslie caused much damage during the night from Saturday to Sunday along the coast of Portugal. Trees and electricity poles fanned, roofs flew from houses, roads were blocked and there was a lot of flooding, especially in the province of Estremadura north of the capital Lisbon.

Portuguese media reported that over sixty people have become homeless because of the natural violence. 27 people were slightly injured by the storm.

According to local media, the damage is considerable, especially in the coastal town of Figueira da Foz. Here the storm came ashore and gusts of wind were measured of 176 kilometers per hour. Near Leiria two camps were evacuated and more than thirty flights were canceled at the airports of Lisbon, Funchal and Maia.