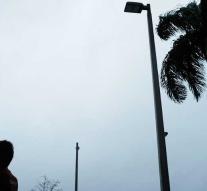 miami - The tropical storm Gordon may grow into a hurricane over the Gulf of Mexico before it lands in the southeast of the American state of Louisiana. That happens late or early Wednesday morning early, is the expectation.

A National Hurricane Center specialist said Gordon could reach hurricane power category 1 over the next 36 hours. That is likely to cause life-threatening waves on the American south coast, including the Mississippi Delta. In addition, 150 millimeters of rain can fall locally apart from high wind speeds.

A warning has been issued for an area that runs from eastern Louisiana, including New Orleans, to the border between the states of Alabama and Florida. There are also platforms in the region for the extraction of oil and gas at sea. The center of Gordon was on Monday afternoon near Marco Island, off the southwest coast of Florida.