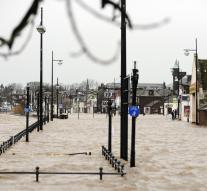 london - The storm Frank lashes Wednesday the British Isles. In particular, Scotland is badly affected, but also the north-west coast of England has to endure suffering.

Hundreds of homes have been evacuated because they are located in flood plains, reports the BBC. Thus the Nith River is out of its banks in the Scottish Dumfries. The village Carpshairn northwest of Dumfries is full of the outside world as a result of the floods.


A partially collapsed bridge in the English Tadcster.
Photo: EPA

Also in the north of England and Northern Ireland the emergency high. Here are also evacuated dozens of houses. In many places the power outage because power lines are blown down.


A flood in the English Ullswater.
Photo: AP