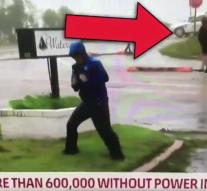 charleston - A reporter from The Weather Channel gets the scorn of thousands of social media users. His TV report from hurricane Florence went viral because he somewhat diminished the power of the storm. While the reporter pretends he can stay on his feet with difficulty, two men walk quietly in the background.

The images caused a small storm on social media. Despite the deadly force of the hurricane, up to now there were eleven deaths, twitterers could see the humor of it. Others lift heavier and speak of a new example of 'fake news'.