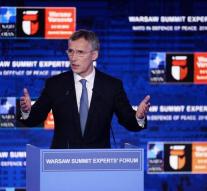 warsaw - Secretary General Jens Stoltenberg has Friday kicked off the NATO summit in Warsaw. He spoke of a,, defining moment in the history of the military alliance. ',, NATO has 70 years kept the peace in Europe, but the security situation has changed. ''

The summit of heads of state and government is mainly dominated by the Russian threat. NATO will send four multinational battalions to Poland and the three Baltic states. Stoltenberg thanked the countries that will enter the command: Canada, USA, Germany and the United Kingdom. In addition, a Romanian brigade is transformed into a multinational force, which is deployed in the southeast of Europe.

,, An attack on a Member State shall be met with violence by the alliance, '' Stoltenberg warned.,, But everything we do is defensive and proportionate. We do not want confrontation and transparent. The Cold War is history and should remain so. ''


It is clear that we need to reduce the risk of military incidents continued NATO boss, referring to the,, risky and provocative '' maneuvers of Moscow.,, Russia is our biggest neighbor, and very important for European security. A meaningful dialogue is essential. ''

The stability beyond Europe's borders is also very important, repeated Stoltenberg. Training allies like Jordan and Iraq is one of the best tools we have, he said. Also former Soviet Areas as Moldova, Georgia and Ukraine get more support.