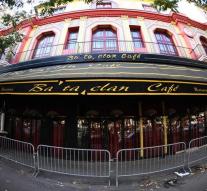 - With a performance by Sting opens the Paris Bataclan concert next Saturday again the doors, almost a year after terrorists in the name of their Islamic faith, killed 89 people. British singer himself announced Friday that he will reopen his account.

Earlier it was announced that the occurrence of Pete Doherty on 16 November would be the first since the attacks. Tickets for the show were sold out quickly.

A day after the occurrence of Sting, the victims of the bomb attacks commemorated soberly at the Bataclan in Paris and elsewhere on November 13, 2015. In total, 130 were killed by the violence.

a plaque will be placed at the Bataclan. This is done in the presence of the members of Eagles of Death Metal, the band was on stage when terrorists invaded the hall and started shooting around.