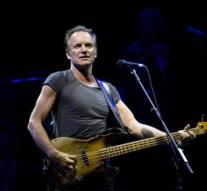 - With a performance by the British singer Sting opens the Paris Bataclan concert Saturday the doors again. The theater was 13 November last year the scene of a terrorist attack in which three offenders murdered and maimed their victims.

Ninety people were killed. Of the approximately four hundred wounded are still twenty in a hospital. The massacre in Bataclan was part of a series of attacks in the French capital on Sunday commemorated in Paris.

The theater has been substantially renovated, according to the manager Jérôme Langlet 'to the Bataclan to return his soul. 'Sting wants to remember the victims, while' life and celebrate the music. 'The evening proceeds will go to associations of victims of the attacks.

Of the 1500 seats there are five hundred mainly intended for survivors. The maps for the other places were sold out in half an hour.