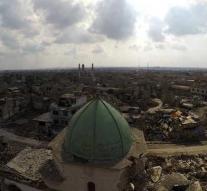 baghdad - Months after the reconquest of the Iraqi city of Mosul on the terrorist organization Islamic State (IS), 11,000 inhabitants of the city are still missing. Many of them were young people arrested and detained by IS. That says army superior Bassem Ali al-Hadschar.

'The Iraqi government and security forces have recently searched underground shelters, tunnels and other places where IS stopped. Nevertheless, the fate of thousands of people is still uncertain ', says the soldier.

IS was expelled from Mosul last summer after a months-long bloody battle with the Iraqi army. Iraq was supported from the air by an international coalition led by the United States. Thousands of people died during this battle. Afterwards, IS was expelled in almost all Iraq and Syria and the organization hardly had any influence.