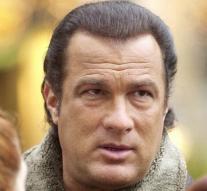 belgrade - The American action hero Steven Seagal (63) will occur during New Year with his blues band in Belgrade. He is during the New Year festival on the main stage in front of the Serbian parliament, the television RTS reported Wednesday.

The famous actor and martial arts enthusiast plays with his band before the singer Lepa Brena Serbian occurs. She is a star of the popular in the Balkans 'turbo-folk' genre, which mixes traditional folk with rock and techno. Seagal Belgrade has in recent months visited several times and announced plans to open an aikido school there.