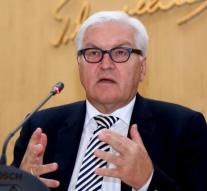 During a visit Friday to the capital Tbilisi Steinmeier advocated to reward the progress of reforms in the Caucasian republic 'as soon as possible ''. The date for any decision he called september.

In Germany live mainly in the CSU reservations for Georgians without a visa to enter the European Union. Background is the fear of increased violence by criminal gangs. But Steinmeier contrast, states: 'The issue of visa liberalization for us is not if, but a matter of when. '