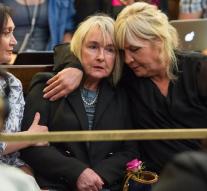 johannesburg - The father of former model Reeva Steenkamp says Thursday ' relieved ' to be after the judge's ruling that Oscar Pistorius is guilty of murder.

"It's a big relief. It is a fair conclusion that the judge gave ". Barry Steenkamp gave after the meeting a brief statement and then burst into tears.