Home / World / Statue of Liberty was designed as a Muslim woman 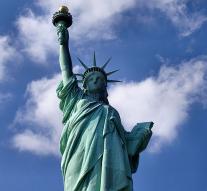 - The Americans are so important for the Statue of Liberty in New York was originally intended as a Muslim woman. The image of the French sculptor Frédéric Auguste Bartholdi would namely be initially placed in the Suez Canal in Egypt. It reports the Smithsonian, the magazine of the same board that provides scientific publications of all kinds.

The former Egyptian ruler Ismail Pasha found the project too expensive, however, and rejected it. Bartholdi adapted his design somewhat, after which it was shipped in parts to the United States in 1886, as a gift from the French to the American people. The 93 meter high statue has since become as American symbol of welcome to the guests in the New York Bay.

In Egypt, Ismail Pasha took pleasure with a lighthouse, which was placed later at Port Said at the entrance to the Suez Canal.