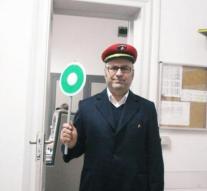 - Vito Piccarreta, the stationmaster on Tuesday gave the green light for the train that would later on top of another train collision is there all the way through. The disaster came at least 27 passengers in southern Italy.

'I gave the whistle, of course. I gave the go-ahead. But it's not only my fault, 'the chief of Andria station tells the Italian newspaper Corriere della Sera. 'They want to blame me, but I am also a victim. '

'He's upset. Broken, 'says a family friend at the newspaper. 'He does not eat, does not sleep. He thinks constantly da moment that forever changed his life. He goes down at the thought of all those people who died in a terrible way. '


Vito Piccarreta has been working for 24 years on the railways and always did his work carefully, according to the friend.


The station master of the station where the other train left was deeply moved by the event, says his son. 'My father is very sad. Not only because of the passengers who were in the train, but also because he has lost colleagues. '

Both railway employees are the subject of the investigation into the accident.

Two trains collided Tuesday on a single track head-on between the towns of Andria and Corato, north of the city of Bari. In addition to 27 deaths there were at least 50 wounded.

Both trains were at the time of the collision drove about 100 kilometers per hour. The trains, each consisting of four wagons, of which there were at least two heavily damaged.