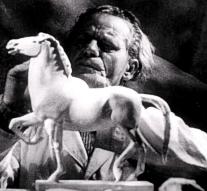 - The German state of Rhineland -Palatinate will Nazi art exhibit that has been seized by the police in May. According to Minister of Culture Monika Grütters the exposition is necessary for the processing of the Nazi dictatorship , she told the German magazine Der Spiegel.

These include to bronze statues of horses that once stood for the new Reich Chancellery of Adolf Hitler.

The artworks are created by Josef Thorak and were in a warehouse in Bad Durkheim discovered after a raid.

The sculptures were housed after the war in a military depot and in 1989 there stolen . The minister mentions two institutions in Berlin, which from spring next year, at least have to show some of the works.