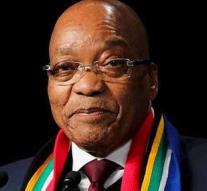 johannesburg - The South African government party ANC has given President Jacob Zuma 48 hours to resign as head of state. Otherwise he will be relieved of his function. The state television channel SABC has announced this on Monday night.

Party chairman Cyril Ramaphosa and general secretary Ace Magashule would have given Zuma that ultimatum in person after the executive committee of the ANC had met for hours behind closed doors in a hotel in Irene, near Pretoria.