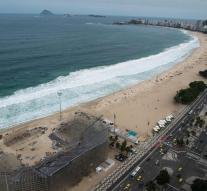 - Rio de Janeiro on Friday declared a financial emergency. According to the authorities, emergency measures necessary to prevent a total collapse,, public safety, education, transport and environmental management '' during the Olympics.

The state of his income depends partly on the oil industry. However, sales have long been under pressure due to falling oil prices. Rio expects to end the year deep in the red and has asked the federal government for financial support.

During the Olympic Games are half a million foreign visitors expected. They do, according mayor of the city of Rio de Janeiro to worry.,, The financial emergency in the state leads in no way delay of Olympic projects, '' promised Mayor Eduardo Paes on Twitter.