Home / World / State of emergency in Mali after terrorist attack 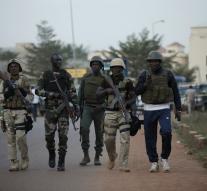 Friday militants held dozens of people hostage in a hotel in the Malian capital Bamako. Malian commandos made ​​at the end of the afternoon, ending the hostage.

According to President Keïta, 21 people died in the hostage crisis, including the two militants. Earlier it was talked about 27 deaths. Seven people were injured, three of whom are in the same boat.

In the hotel were at the time of the attack many foreigners. Among the dead was at least one American and a Belgian diplomat. Furthermore, would have killed three Chinese. As far as know there were no Dutch at the hotel.

The attack was claimed by the radical Islamic movement al- Mourabitoun who says working with al- Qaeda in the Islamic Maghreb (AQIM).