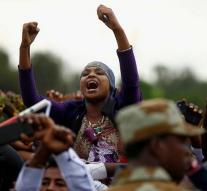 - The Ethiopian Prime Minister Hailemariam Desalegn has declared a state of emergency in the country. He took the decision Sunday after weeks of protests and attacks on public enterprises in Ethiopia. ' This is necessary because the current situation is a major threat to the population, 'the Prime Minister on state television.

It's been a turbulent time in Ethiopia. Population feel deprived. Demonstrators stormed government companies. Also, a number of Dutch companies was attacked by activist groups. According to the Ministry, the attack not specifically directed against the Dutch companies, but be seen as an extension of the Ethiopian government.

The Dutch embassy has formed a crisis team. Which is in constant contact with Dutch companies and the Ethiopian government. The Ministry advises Dutch who travel to Ethiopia to take the advice an eye for the country.