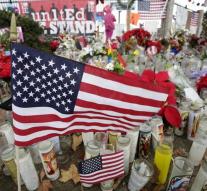 sacramento - The governor of the US state of California on Friday (local time) still declared a state of emergency because of the shooting in San Bernardino on 2 December.

With the declaration obliges the state to help themselves to the San Bernardino region in dealing with the aftermath of the shooting, which fourteen people were killed. The State provides additional manpower and do not have to pay the region for the funerals of the victims and the death certificates, reports USA Today newspaper.

Syed Farook and his wife Tashfeen Malik opened on December 2 fire during a Christmas celebration of a regional service. In addition to the fatalities were 26 people injured. The two perpetrators were later shot dead by police.