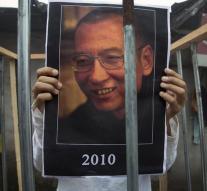 peking - The condition of the sick winner of the Nobel Peace Prize and dissident Liu Xiaobo is critical. Liu's hospital reports on his website that Liu is seriously ill and breathes his breathing.

Liu was sentenced to 11 years' imprisonment for 2009 for 'committing to overthrowing the state power'. That happened after he had worked on a petition known as 'Charter 08' calling for political reforms.

Liu has recently been transferred from a prison to a hospital to be treated for liver cancer.