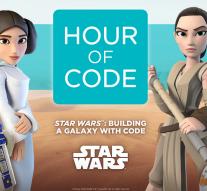 - To make children excited for the programming, Disney is working with Code.org a programming game where characters from the new Star Wars film make an appearance.

Princess Leia, and Rey make part of it, as well as the robots R2-D2 and BB- 8. That female characters standing in front, is no coincidence. Code. org particularly wants to appeal to girls. Therefore, it was already chosen last year for characters in the film Frozen.

Code. org is a non- profit organization that, among other schools helps with programming workshops. According to the initiators makes the Star Wars theme this year for the program more as 'hip and cool' is seen.