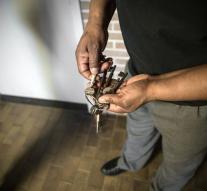 perth - In a juvenile detention center near the Australian city of Perth has led a group of prisoners Saturday fuss. Guards with flash grenades and pepper spray had to bring the rebellious youth to calm down, reports the Australian ABC.

It would go to seven prisoners who threw include rocks at guards and smashed windows. No one was injured during the umpteenth skirmish in the Banksia Hill detention center.

Since the beginning of this year in the juvenile 45 reports of violent incidents. There are some 130 prisoners in the penitentiary.