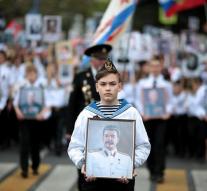 moscow - Soviet leader Joseph Stalin was the greatest personality of all time. That says 38 percent of participants reported on a poll published by the Russian research firm Levada Center on Monday. The Russian President Putin is 34 percent in a shared second place with poet Poetjkin. That's Poetin's highest listing ever.

Stalin was a notorious dictator, but in Russia his role is increasingly emphasized as a victor in World War II. 'The propaganda victory cult adds to Stalin's deprivation,' says Levi Center's sociologist Denis Volkov against the Washington Post.

In the poll conducted since 1989, a representative group of 1600 participants is asked to name the greatest personality from the history of the world. In 2012, Stalin also introduced the list.