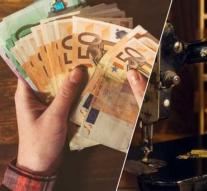 zelzate - They slept on the streets or creaked houses, but suddenly found the treasure of their lives in an empty house: 300,000 cash, hidden in a sewing machine. Joey D. and Kimberly A. from the Belgian Zelzate decided to hand over part of the money to their old friends. The couple now face a prison sentence for money laundering and drug possession.

They migrated from one knowledge to another as a homeless couple, slept on the street, but also regularly in abandoned houses. A wanderer's existence, until 32-year-old Joey D. and his then-girlfriend Kimberly A. (33) found a 'treasure' in an empty building in East-Flemish Assenede: 300,000 euro cash hidden in an old Singer sewing machine.

For Joey and Kimberly, their lives seemed to take a new start, their years of misery seemed over. 'They wanted to buy a house, because they know all too well that shelter is the start of a normal life,' says Sofie Vermeir, Kimberly's lawyer.

But Joey first wanted to thank some of the people who helped him out of trouble in recent years, and he distributed money to eleven friends. During their journey as wild benefactors Joey and Kimberly stayed in the garden house of a friendly couple, where the police invaded a drug file. The agents found one and a half kilos of speed and 1. 001 ctc pills. The couple was not at home, but the police did take Joey.

With that accidental arrest Joey had no less than 50,000 euros in cash, which meant that the police turned the garden house around and checked out the whole thing. It brought Joey, Kimberly and the eleven friends to the Ghent correctional court, where the case was pleaded yesterday. 'They shared the money as well-wishers,' says the public prosecutor. 'But of course you can not hand out money that is not yours. And the people who took the money should have known that Joey and Kimberly could not have been hit by such sums of money in a 'normal' way. '

The owner of the house where the amount was found, demands the money back. But Jesse Van den Broeck, Joey D.'s lawyer, wants the 'honest finder' to keep the money. 'In the first hour procedural errors have already been made, so the investigation is void. I ask Joey to get his money back and not be punished. 'The judge clearly could not appreciate the argument about the procedural errors. He will make a statement in two weeks.