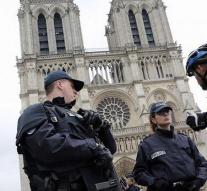 paris - UPDATE 16.47 pm- A square at the Cathedrale Notre-Dame de Paris in Paris was cleared on Tuesday afternoon. It is not yet clear what exactly happened. According to some bystanders, shots would have been heard.

According to a press agency, Reuters, a man has attacked an agent with a hammer. Then this man was shot by agents.

More on this later