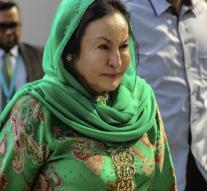 kuala lumpur - Malaysian prosecutors prosecute the wife of former Prime Minister Najib Razak for tax evasion and money laundering. Rosmah Mansor denies the accusations and can wait for her lawsuit in freedom, after she has paid two million ringgit (over € 420,000).

Prosecutors read the charges in the court in Kuala Lumpur. The wife of the former prime minister had spent the night in the cell. Rosmah arrived flanked by agents at the court, where she was photographed laughing and waving through the media.

The authorities also prosecute Rosmah's husband. During the long-term reign of Najib, billions of dollars would have disappeared from the 1MDB state fund. There were also millions of dollars in the bank account of the former prime minister, who had to give up this year after an election defeat.

The authorities later announced that they had confiscated about 275 million dollars (almost 240 million euros) in cash, designer bags, jewelery and watches in premises that were associated with the couple. Prosecutors also argue that Rosmah would have tried to influence a witness.