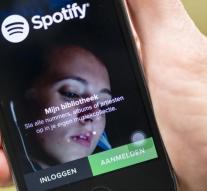 moscow - Spotify will again try to break into Russia. The streaming service has been in contact with Russian record labels, Billboard reported Friday. Spotify does not react.

Spotify had set up a Russian subsidiary in 2014. The service should be launched mid-2015, but a few months before Spotify pulled the plug. That would have to deal with the economic crisis and strict Russian laws on user information.

Spotify is active in dozens of countries, including the Netherlands since 2010.