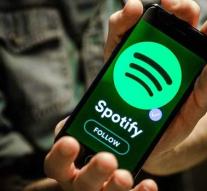 stockholm - Again the music streaming service Spotify sees the number of subscribers increase. Figures released by the Swedish group show that it now has 83 million paying users worldwide. That is an increase of eight million subscribers in the past three months.

Spotify now says it has 180 million active users. The streaming service hopes to pass the limit of 200 million users by the end of 2018. Of them, 93 to 97 million people would then have to be a subscription holder.

Incidentally, it appears that the number of users without a subscription stagnates. Despite the fact that Spotify gave non-paying users more rights in April. In comparison with the figures from the first quarter, there are even fewer users who have the free version of the streaming service. But compared with figures for the second quarter of 2017, the number has increased by 23 percent.

In the music streaming business, an interesting struggle is about to emerge in the coming period. Spotify can face strong competition from Amazon and especially Google, which is rolling out a new streaming service. Moreover, in the United States, Apple Spotify seems to be outperforming the number of paying users before the end of this year.