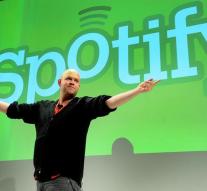 stockholm - Just in time for the holidays Spotify has a collection of playlists launched under the name Party. Users gain ready- to-use playlists with music presented for different types of parties. Spotify Party is since Wednesday rolled out the apps for Android and iOS, the company announced on its blog.

Particularly in these playlists is that the songs smoothly into one another, Spotify promises. This provides non-stop music without silences especially at parties can ruin the atmosphere. Users can set whatever mood they want their party : a quiet dinner a wild dance party. Spotify fits the music selection accordingly.The DJ and producer Diplo made ​​a special playlist for the music streaming service, with around 120 tracks. The Swedish company was previously Running with Spotify, the music is tailored to the rate at which the listener run.
NEW