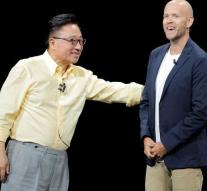 new york - The popular music service Spotify and Samsung have entered into a long-term partnership. That was announced by ceo and founder of Spotify Daniel Ek during Unpacked 2018 in New York.

Samsung, in contrast to other major brands, chooses to work with a popular music service instead of reinventing the wheel.

The collaboration makes it easy for users of Samsung products, such as the smart speaker Galaxy Home announced today, to seamlessly play music anywhere.

Spotify will also become the standard music option for the smart assistant Bixby. Both companies indicate that it is only a start of the collaboration and that more functionality will be added in the near future.