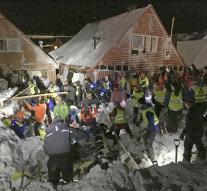 oslo - Svalbard has a snow avalanche buried Saturday at least ten houses. Here, a man was killed and nine people were injured, including four kinderen.Van the injured are three bad shape.

The tons of snow came down from the mountain Sukkertoppen in Longyearbyen, the largest settlement on the island group. It is possible that bad weather caused the avalanche. In the night from Friday to Saturday Spitsbergen was ravaged by the worst storm in thirty years.

On Spitsbergen, part of Norway, comes at this time of year the sun is not above the horizon. Due to the dark, the rescue operation is made more difficult. Searching with strong lights and sniffer dogs to possible additional victims.