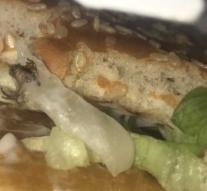 edinburgh - The 20-year-old Ciara was quick to get a hamburger at McDonald's in Edinburgh, but when she had taken a few bites, she made a discovery that took away all appetite. On top of a piece of lettuce was a dead spider.

'I just found a dead spider in my Mac, absolutely disgusting !! Totally unacceptable and I did not even get an apology when I returned. 'Ciara was angry after her discovery, and showed her dissatisfaction clearly on Twitter. She was offered a replacement burger, but she could not bring herself to eat it anymore.