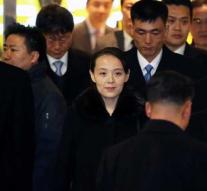 seoul - ' Honest and sincere. \u0026 Quot; The North Korean state press agency called the talks that the sister of leader Kim Jong-un had on Saturday with the South Korean president Moon Jae-in. The president has been invited by Kim Yo-jong to visit North Korea soon. But KCNA did not mention that.

According to the news agency, Kim Yo-jong handed a personal letter from her brother on Saturday in a 'courteous' manner and made his 'intentions' clear to the South Korean president. The fact that she had invited Moon also did not happen.

Kim Yo-jong is part of a delegation that is due to the Olympic Games in South Korea. She is the first member of the North Korean ruling dynasty to visit the southern neighbor.