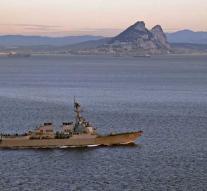 london - A Spanish warship has provoked the British authorities on Tuesday by entering the territorial waters of Gibraltar and letting the Spanish national anthem blow through the speakers on deck. A small boat from the British navy escorted the Spanish frigate on its challenging trip along the rock.

Due to the brexit, the tension between the two countries has increased. There have already been dangers too close to the coast by Spanish ships because of the British withdrawal from the EU to ask attention for the status of this overseas territory of Great Britain. Madrid has long since returned the almost 7 square kilometers on the south coast.