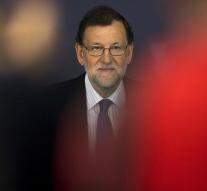 - Spanish Prime Minister Mariano Rajoy, on Sunday won the election with his Popular Party, can put the formation of a 'grand coalition' with the Social Democrats out of his head. The PSOE will not help a majority the PP.

Rajoy announced Monday first to attempt with the Social Democrats to form a government, but so wise off his advances. After the December elections, which ended in a similar stalemate, the PSOE held even though the boat. The prime minister must address one of his few alternatives after this Argus.

The PSOE wants to give tacit support to a PP government, a spokesman of the party Monday. The Social Democrats are hoping to succeed the formation. To go to the polls for the third time the PSOE seems unwise.