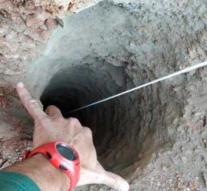 madrid - The little boy Yulen, who disappeared in a Spanish well, would have been localized.

According to the Spanish news site El Español, the body of Yulen was found, at a depth of 73 meters below the ground. The well would be 107 meters deep, and in some places only 25 centimeters wide.

He had fallen into the pit on Sunday.

The news has not been officially confirmed.