Home / World / 'Spanish rapper' who glorifies terrorism 'do not extradite' 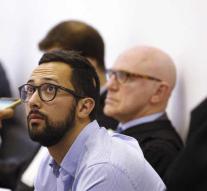 - Belgium does not have to deliver the rapper who is wanted by the Spanish authorities because of inflammatory texts. The council chamber of the court in Ghent determined that. The Public Prosecutor can still lodge an appeal.

The 24-year-old Valtònyc from Mallorca was sentenced to 3.5 years in prison in Spain last year because of his texts. The rapper- real name: Josep Miquel Arenas- then fled to Belgium.

Valtònyc had, among other things, called in his numbers to occupy the summer residence of the royal family by force. A Spanish court condemned him for the glorification of terrorism, the provocation of the royal house and the death threats of politicians. The verdict was confirmed at the beginning of this year by the Spanish Supreme Court.

The rapper reported to the Belgian police after the Spanish authorities issued a European arrest warrant. He is, however, just at liberty. Valtònyc invokes the (artistic) freedom of expression.